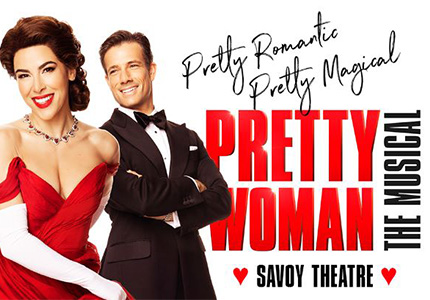 Pretty Woman: The Musical is strutting its stuff at the West End's Savoy Theatre. Starring Aimie Atkinson and Danny Mac, and featuring music from legendary rock artist Bryan Adams, this feel-good adaptation of the classic 1990s rom-com is the perfect date night show.
Read more
TICKET OFFER
WAS £35.00NOW £25.00
Booking until 11 June 2023
Run time is 2 hours 20 minutes (including an interval)

The Savoy Theatre box office is located within the theatre building and is open from 10am – 8pm Monday to Saturday. Pre-purchased tickets can be collected from the theatre’s box office from an hour before the performance is due to start. Customers will need to bring the card they used to make the purchase as well as their booking reference. Visit the official website

After the war, the theatre became synonymous with hosting premieres including Paddy the Next Best Thing (1920), Treasure Island (1922), Oscar Wilde’s Salome (1931) and Noel Coward’s Blithe Spirit (1941), as well as several Shakespeare productions.

Following renovations after a fire in 1990, the theatre hosted a number of plays and musicals, including Noel Coward’s Relative Values (1993), Tom Stoppard’s Travesties (1993), starring Anthony Sher, She Loves Me (1994), starring Ruthie Henshall and Communicating Doors (1996).

Beatles’ musical Let It Be (2013-2014) followed, along with Cabaret (2013), starring Will Young and Dirty Rotten Scoundrels (2014-2015), starring Robert Lindsay. 2015 saw Imelda Staunton take to the stage as Mama Rose in musical Gypsy, earning an Olivier Award on the way.

In 2019, the iconic venue became the home of Dolly Parton's 9 to 5 the Musical, which marks the first time the show has been performed in the West End. The show stars theatre legend Bonnie Langford as well as actress Natalie McQueen, Love Island 2017 winner Amber Davies, and Baywatch star David Hasselhoff.

Pretty Woman: The Musical transferred to the theatre in July 2021, starring Danny Mac and Aimee Atkinson. A planned production of Stephen Sondheim's Sunday in the Park with George has been postponed indefinitely.