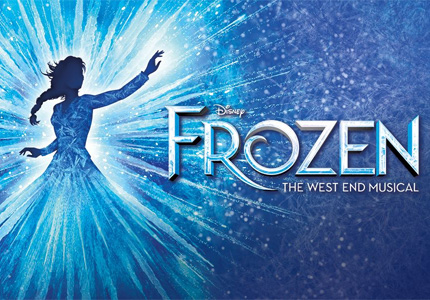 Disney’s global phenomenon Frozen is transformed into a magical musical complete with new songs as well as familiar favourites. Frozen the Musical skated into Theatre Royal Drury Lane, London in Spring 2021 and has been melting hearts ever since. Fans of the film will be delighted to hear iconic musical numbers including Let it Go and Love is an Open Door, as well as a host of new numbers, written by original writing team Robert Lopez and Kristen Anderson-Lopez. Frozen the Musical will transport audiences to the kingdom of Arendelle and is the perfect theatrical treat for all ages.
Read more
TICKET OFFER
WAS £29.50NOW £25.00
Booking until 18 June 2023
Run time is 2 hours 15 minutes (including an interval)

The Theatre Royal Drury Lane box office is located within the theatre building on Catherine Street and is open Monday – Saturday from 10am – 7:45pm. Tickets purchased for collection can be picked up from the box office during the hour before the performance is due to start. If you are planning on collecting tickets then you will need your booking reference and the card used to make the purchase. Visit the official website

London’s oldest theatre, the Theatre Royal Drury Lane has one of the largest stages in the West End. Four buildings have stood on the site, the first opening in 1663 and housing comic melodramas and Restoration comedy that featured the likes of Nell Gwynn and Charles Hart.

Following a fire in 1672, the theatre was rebuilt and reopened in 1674, employing Joseph Grimaldi as the resident Clown. It is said that the ghost of Grimaldi haunts the theatre to this day! 1791 saw the building demolished and rebuilt, opening once more in 1794 before burning down yet again in 1809.

Under the management of Augustus Harris in 1879, the venue began to host pantomimes alongside operas and comedies, as well as large-scale dramas including Armada (1888) and The Whip (1909), which featured many special effects and gigantic sets.

Sir Alfred Butt renovated the venue in 1922, reducing the seating capacity and reinforcing the structure. Ivor Novello played popular musicals throughout the next decade, until the outbreak of the Second World War. During this time, the theatre became the headquarters for the Entertainments National Service Association.

Sam Mendes directed the world premiere of the musical adaptation of Charlie and the Chocolate Factory, which opened at the theatre in 2013 and played a five-year run until 2017, before transferring to Broadway. 42nd Street returned in March 2017 with Mark Bramble's production and played to packed-out audiences until January 2019.

The theatre underwent substantial refurbishment throughout 2019 and most of 2020, and reopened in summer 2021 with the Broadway transfer of Disney's Frozen the Musical.