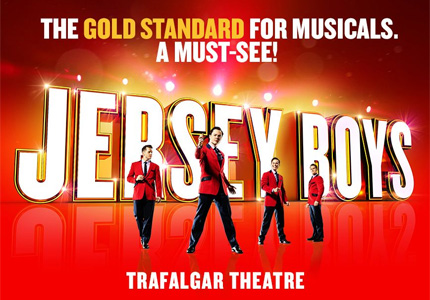 Oh What a Night! Jersey Boys, the smash-hit musical sensation, is lighting up London’s West End with the sounds of Frankie Valli and the Four Seasons. Jersey Boys, the Tony, Olivier and Grammy Award winning musical, tells the story of Frankie Valli and co, and features a host of hit songs including "December, 1963 (Oh What a Night)”, “Big Girls Don’t Cry” and “Working My Way Back to You”. This production marks the inaugural production at the Trafalgar Theatre since it re-opened in April 2021 following a multi-million pound redevelopment.
Read more
TICKET OFFER
WAS £45.00NOW £27.00
Booking until 30 April 2023
Run time is 2 hours 30 minutes (including an interval)

The Trafalgar Theatre box office will open for in-person bookings following the restoration of the building in 2021. Regular box office hours will be 10:00-19:45 on Mondays to Saturdays. Visit the official website

Formerly the Trafalgar Studios and the Whitehall Theatre, Trafalgar Theatre is a contemporary venue that is scheduled to open in Spring 2021. Previously split into two studio spaces, Trafalgar Studios 1 and 2, the venue is being redeveloped into a single, larger theatre space.

Trafalgar Studios 1 opened in 2004 with the RSC’s Othello, and presented a number of successful works for the next decade. The venue truly stepped on the map in 2013 with a season of work by director Jamie Lloyd, Trafalgar Transformed, which saw James McAvoy take on the title role in Macbeth. Lloyd returned to the theatre for a second season in 2015, in which McAvoy returned in The Ruling Class, and Martin Freeman lead a production of Shakespeare's Richard III.

Several Olivier-Award winning productions have played at the Trafalgar Studios 1, including a new adaptation of Henrik Ibsen's Ghosts in 2013 and Robert Icke's reimagining of Aeschylus' Oresteia in 2015. Hollywood star Orlando Bloom appeared in Studio 1 in 2018 in a production of dark comedy Killer Joe.

Trafalgar Studio 2 presented intimate, innovative new works from national and international companies. Studio 2 opened in 2005 with Peter Arnott's Cyprus and went on to showcase other successes, including the Olivier nominated La Boheme, the hit comedy The Play That Goes Wrong, and a season of work from the Donmar Warehouse.

The Trafalgar Theatre opened with the smash-hit jukebox musical Jersey Boys in summer 2021.