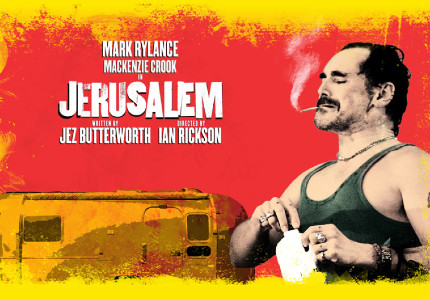 Mark Rylance will reprise his award-winning role in Jez Butterworth's critically acclaimed play Jerusalem next year when the play returns to the West End at the Apollo Theatre. Since its premiere at the Royal Court Theatre over a decade ago, Jerusalem has been widely heralded as the best play of the 21st century by critics and audiences alike. Rylance will be joined by Mackenzie Crook who is also reprising his role from the original cast. Jerusalem opens in April 2022 for a strictly-limited 16-week season at the Apollo Theatre.
Read more
FIND TICKETS
Booking from 1 June 2022 until 7 August 2022
Run time is 3 hours (including 2 intervals)

The Apollo Theatre box office is located within the theatre building on Shaftesbury Avenue. Tickets can be collected from the theatre within the hour prior to the performance start time. Visit the official website

Located on Shaftesbury Avenue, the Apollo Theatre is one of London's most characteristic venues. Opening in 1901 with an American musical, The Belle of Bohemia, the theatre became well-known for hosting a string of musical comedies throughout the early 1900's. In 1908, a four-year run of Follies cemented the venue's success. Following that, the Apollo hosted variety shows up until the end of the First World War.

Throughout the 1920's, the Apollo began to host plays, including a 1928 production of R.C. Sherriff's The Journey's End, starring Laurence Olivier. Since then, works from prolific playwrights such as Noel Coward, Terence Rattigan and Ivor Novello have entertained audience.

The Apollo Theatre has upheld its tradition for staging plays rather than large-scale musicals, due to the intimate stage and auditorium. Notable productions include Jez Butterworth's Jerusalem (2010, 2011-2012), starring Mark Rylance and Mackenzie Crook, followed by The Madness of King George III (2012), starring David Haig and Long Day's Journey Into Night (2012). Mark Rylance and Stephen Fry starred in all-male productions of Richard III and Twelfth Night (2012), which ran in rep.

In 2013, the acclaimed stage adaptation of The Curious Incident of the Dog in the Night-Time transferred to the venue from the National Theatre. On December 19th 2013, the play came to an abrupt end when the Balcony of the seating collapsed. Closed for restructuring until March 2014, the Apollo Theatre reopened with a Royal Court transfer of Let the Right One In. Following a hugely successful run at London's St James Theatre, new musical Urinetown (2014) transferred to the theatre in September, playing an extended run until January 2nd 2015.

2015 opened with a limited run of the Donmar Warehouse transfer of My Night With Reg, which ran for three weeks. Following that, Kristin Scott Thomas starred in a revival of The Audience, which achieved previous success at the Gielgud Theatre in 2013. Further productions included the West End premiere of Dear Lupin and Edinburgh Fringe Festival favourite Showstopper! The Improvised Musical, which was extended due to popular demand. Mischief Theatre's festive farce Peter Pan Goes Wrong flew into the theatre for a Christmas period, embarking on a tour in 2016.

Dan Gillespie Sells and Tom MacRae's smash-hit new musical Everybody's Talking About Jamie later transferred to the venue in November 2017 following a successful premiere in Sheffield. Running in the daytime, August 2019 saw the return of Horrible Histories: Barmy Britain Part 4. Over the Christmas period, family-friendly show The Snail and the Whale played.

The Apollo Theatre closed in March 2020 due to the COVID-19 pandemic. It reopened in October 2020 with social distancing measures in place, before closing its doors again in December 2020. Comedian Adam Kay brought his acclaimed one-man show This is Going to Hurt to the theatre, alongside the long-running musical Everybody's Talking About Jamie. The hit musical paused its West End run in September 2021, expecting to return to the theatre in 2022.

During the summer of 2021, the Horrible Histories gang brought the fifth instalment of their acclaimed Barmy Britain series to the theatre.