"Sparkles with a brand new cast"

After strutting its way from Sheffield Crucible to the West End’s Apollo Theatre in 2017, British musical Everybody’s Talking About Jamie continues to sparkle in the spotlight with a brand-new cast, featuring musical theatre favourite Layton Williams.

Based on a true story, we meet Jamie New on his 16th birthday. Living in a council estate in Sheffield with his single mum (Rebecca McKinnis), and told by his careers teacher Miss Hedge (Hayley Tamaddon) that he should be a fork lift driver, Jamie wants to be more. And by more, he means a drag queen. Armed with some red heels, support from his mum, and level-headed best friend Pritti (Sabrina Sndhu), Jamie ends up at local drag attire shop Victor’s Secret, and owner Hugo (Shane Richie) guides him onto the path to success. Which, by the way, involves him breaking boundaries and wearing a dress to the Year 11 prom.

Dan Gillespie-Sells and Tom Macrae’s musical is full of catchy tunes, particularly opening number ‘And You Don’t Even Know It’. Full of contemporary lingo that teens genuinely use, this show is firmly set in the present and captures our society as a place where we can choose how we want to live perfectly. Kate Prince’s choreography uses the ensemble to create a community within the show, grounding it within its realistic setting. The Year 11 class, full of West End debuts, are one of the most energetic in the West End. 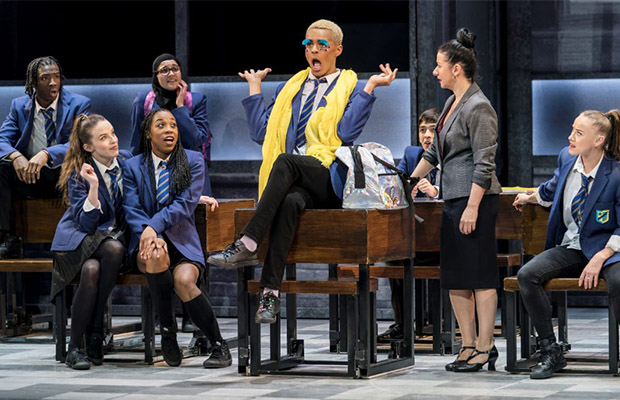 A cross between Billy Elliot and Kinky Boots, it’s great to see a show set in a northern, working class community: family friend Ray buys knock-off chocolate bars at the market (After Sevens, Kat-Kits). It’s also wonderful to see older drag queens, alike to Paul O’Grady’s Lily Savage, being Jamie’s mentors rather than the airbrushed queens Jamie watches on Ru Pauls’ Drag Race. It is clear this show knows its roots and it wants to celebrate it – a brilliant example to set. However, it’s a shame the three queens aren’t used more often.

Layton Williams is a revelation – as expected - as Jamie. Effortlessly knocking out high kicks, sass exudes from his character with every word and shoulder shrug. His voice is crystal clear, and doesn’t fail to deliver on the softer, sadder moments of the show either. As his mum, Rebecca McKinnis takes the emotional weight of the show, receiving rapturous applause after second act ballad ‘He’s My Boy’. Shane Richie gives gusto as Hugo/Loco Chanelle, and though his singing voice and northern accent aren’t quite there, he has a great charm and likeability. Sabrina Sandhu, as Pritti, knocks it out the park with her solo ‘It Means Beautiful’.

Everybody’s Talking About Jamie is a fun, exuberant show full of heart and a strong message: shine bright as who you are.