Pride and Prejudice* (*sort of) 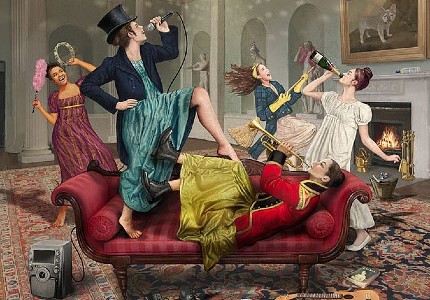 Pride and Prejudice* (*sort of), an irreverent, contemporary take on Jane Austen's beloved novel, is transferring to the West End's Criterion Theatre for an open-ended run following a successful UK-wide tour.

Isobel McArthur's production, which uses romantic pop songs from the last 200 years to help retell the classic tale of romance, scandal and manners, is told from the perspective of six female servants.

The Criterion Theatre Box Office is located within the theatre building in Piccadilly Circus and is open Tuesday-Saturday from 10am and Sunday from 11:30am. The Box Office is closed on Monday. Pre-purchased tickets can be arranged for collection at the theatre’s box office an hour before the show starts. If you plan to collect your ticket you will need the card you used to make your purchase along with your booking reference. Criterion Theatre London

London’s Criterion Theatre has had a very varied history, “going dark” several times, whilst changing performance genres. Originally built in 1973, the venue was intended as a concert hall, adjoined to a restaurant. Eventually, the decision was made to convert the building into a theatre, with initial productions including An American Lady and Topsyturbeydom (1874), neither of which were huge successes. Soon, the theatre began to host Edwardian musical comedies, a hugely popular genre in the West End at the time.

Under the management of prolific theatre manager Charles Wyndham, who took charge of the theatre between 1875 and 1899, the Criterion began to establish itself as one of London’s more successful venues, with productions such as The Great Divorce Case (1876), Foggerty’s Fairy (1881) and Haste to the Wedding (1892).

The Criterion Theatre continued to house productions between the World Wars, including Musical Chairs, starring John Gielgud, and Terence Rattigan’s French Without Tears (1936), which ran for an impressive 1,039 performances. During World War II, the venue closed down and became a safe studio for the BBC, who broadcasted news and light entertainment.

In the 1970’s, the theatre was threatened with redevelopment, but was met with public protest. Post-War productions included Samuel Beckett’s Waiting for Godot (1955) and Anouil’s comedy The Waltz of the Toreadors (1956).

From 1996 to 2005, the Reduced Shakespeare Company played The Complete Works of William Shakespeare (Abridged) to rave reviews and acclaim, before being replaced with Jon Buchan’s popular stage adaptation of Alfred Hitchcock’s The 39 Steps, which ran at the theatre for 9 years.

Follow the closure of The 39 Steps, Menier Chocolate Factory’s production of Close To You: Bacharach Reimagined (2015-2016) transferred to the Criterion. In 2016, Mischief Theatre’s brand-new comedy The Comedy About a Bank Robbery (2016) transferred and continues to this day. Occasional small productions continue to play alternate performances at the venue, including Mr Popper’s Penguins (2016).

The Criterion Theatre reopened in May 2021, following a year-long closure due to the COVID-19 pandemic. The actor-musician production of Amelie - the Musical played a socially-distanced summer season.

In October 2021, Isobel McArthur’s irreverent take on Jane Austen, Pride and Prejudice* (*sort of) opens at the theatre for an open-ended run.