Come From Away review - February 2019

"Will leave your heart filled with kindness"

The West End is in need of a new musical which breaks the mould. The current landscape sees an abundance of jukebox shows (Mamma Mia!), musicals based on movies (Waitress, 9 to 5) and theatres under refurbishment (Drury Lane, Dominion). Of course, there’s nothing wrong with these shows – many are fantastic – but after some time it begins to feel formulaic and a little stale. Enter Come From Away.

Irene Snakoff and David Hein’s Canadian musical Come From Away is based upon the events of 9/11. Rather than focusing on the events unfolding in New York, the show zooms into the small town of Gander, Canada. During September 2001, the small town (9,000 citizens) saw its population almost double as it welcomed over 7,000 passengers from the 38 planes which had been diverted to Gander airport.

It’s a hefty concept for a musical, but one which works incredibly well due to the combination of a spirited ensemble cast and thorough direction by Christopher Ashley. The twelve-strong cast weave between being the citizens of Newfoundland - the Mayor, a news reporter on her first day - to the ‘Plane People’ – with ease. No one is a principal character, which further emanates feelings of community and togetherness from the stage. We see snippets of stories – based on real life accounts- unfold as we meet people from all over the world, and the show focuses on even the tiniest parts of the help the Newfoundlanders can give. For instance, when phones and computers are set up, and a vet nurses the animals found on the planes. 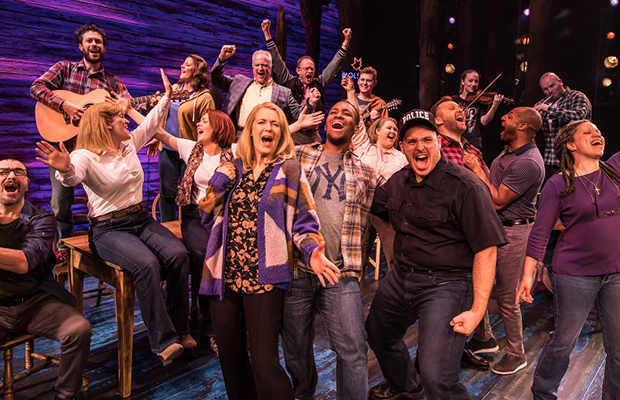 The show plays with comedy and tension throughout, capturing an all-manner of feelings from people stuck in an unknown situation. Tensions rise when passengers are stuck on a plane for ’28 Hours’ (featuring excellent choreography and staging), and the show doesn’t shy away from including the racial tensions which increased following the attacks. The lack of interval means there’s no pause on the events, keeping the audience emotionally engrossed. Sankoff and Hein find pockets of comedy throughout: a team of fit cardiologists cleaning toilets, or the one-liners from Kevn J (Jonathan Andrew Hume). The two feelings balance out well: while a new couple meet, a long-term relationship is at their breaking point.

Sankoff and Hein’s music uses Celtic influences and offers catchy tunes. Though there are no 11 o’clock numbers, breath-taking moments include ‘Something’s Missing’, and Rachel Tucker’s performance of ‘Me and the Sky’, a near-verbatim song about Beverley Bass – the first female captain of an American Airline aircraft.

Come From Away is possibly one of the best imports from Broadway on the British stage. With its collection of heart, community spirit, and incredible cast, it will leave your heart filled with kindness and an appreciation of what people can do when a crisis emerges.