Come From Away review - September 2019

"Hate will never triumph over love - and especially not in Newfoundland" 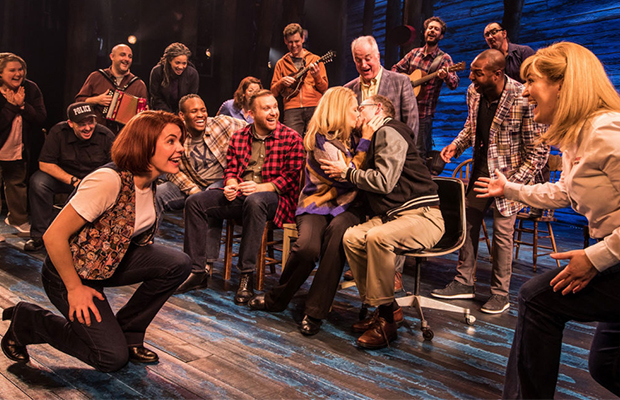 A theatre production about 9/11? It’s hard to imagine that it could be anything other than utterly depressing. But that’s precisely what Come From Away is not. That’s because it tells another, much lesser-known, and far more uplifting story from that tragic day. It’s the story of the 38 aeroplanes that were diverted to Gander International Airport in Newfoundland when U.S. air space was closed following the terrorist attacks. More specifically, it tells the story of what happened when the 7,000 ’plane people’ on board the diverted aircraft were thrown together with the locals under the strangest of circumstances.

As the Gander residents frantically begin preparing for the town’s population to double, they instantly have the audience tapping their feet along to the music. Song after song is played in the cheerful Celtic-style, thanks to a violin, a fiddle and even an ‘ugly stick’ - a traditional instrument from Newfoundland, fashioned out of household items.

The cast, each playing multiple roles, compassionately convey what it was like for the passengers to be stuck on the tarmac for over 24 hours. They had only a few mobile phones between them and therefore very little information about what had been going on in New York.  Their confusion, anger and restlessness is expressed brilliantly during '28 Hours/Wherever We Are', which ultimately sees the ‘plane people’ drinking the miniatures supply dry.

A one-night stopover in Gander soon turns into several. Wearing donated clothes, and eating meals cooked for them by kind Newfoundlanders, the ‘plane people’ begin to bond with their accommodating hosts. What follows is a truly heart-warming display of humanity; a perfect example of people making the best of a bad situation.

As much as the show lifts the audience up in cheering moments - most memorably in the raucous bar scene - it’s not long before reminders of the horror unfolding in New York resurface in some deeply moving scenes. One especially poignant song, 'I Am Here', highlights one passenger's desperate struggle to get hold of her son who works as a firefighter in Manhattan. The production also explores the difficult theme of Islamophobia in wake of 9/11; through the eyes of a Muslim character who finds himself marginalised by scared and suspicious fellow passengers.

But the most satisfying thing about Come From Away, is that it shows us that hate will never triumph over love - and especially not in Newfoundland.