David Ives' dark comedy Venus in Fur premiered way back in 2010, before opening to sizzling reviews on Broadway. This revival, directed by Patrick Marber, is incredibly sexy, with an electrifying leading lady at the helm. At a base level, it's a kink-filled comedy, but amidst the current news the show takes a different stock, attempting to offer a serious commentary on the female role in society.

After a disastrous day of auditioning potential leading ladies, director Thomas prepares to meet his with his fiancé, but not before rebuking every woman he's seen for the part of temptress Vanda. He's upset that women aren't “women” anymore; apparently femininity has been thrown out of the window and now everyone dresses like “dykes”. And although it’s clear his character is meant to be unlikable (a clear repellent egomaniac), what basis is that for a play nowadays? 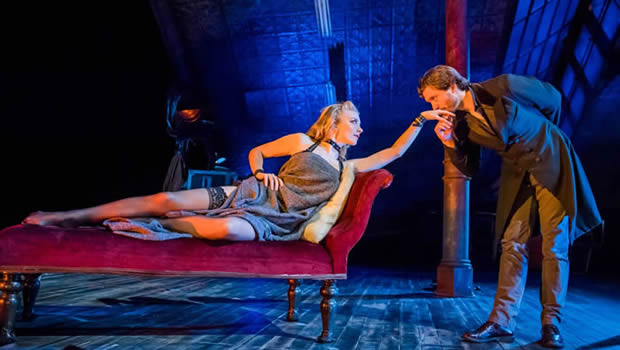 But as lighting cracks overhead, a bolshy New Yorker appears in the room, as if by magic. That's the first sign. Natalie Dormer is magnetic; she's wickedly funny as the desperate auditionee, pulling Thomas up on his inherent sexism. She's forcibly harsh as Vanda, and although you guess the play's twist early on, it's a performance of definite, brutal ferocity. David Oakes is similarly good as the sappy director, and the chemistry between the two makes for compelling viewing.

Taking place in Rob Howell's stunning, suitably dark design, the play transforms from a relatively playful comedy into something slightly sinister. It's revealing and deliciously manipulative; “you yourself are so individual” says Thomas as Kushemski. “A man usually says that to a woman whose individuality he is about to undermine”, Vanda responds. But are they talking as the characters within the play, or themselves? You're never quite sure, and it's thrilling, but also tiresome.

When Vanda’s true identity is revealed, it's unsurprising, as she's gradually pushed herself into having the upper hand. It's a strong message, it's so relevant today, and it's wonderfully refreshing to see a powerful central performance from a female. But glancing at the programme and seeing that the entire creative team, including the writer and director, are male, it sort of undermines the whole point of the play – doesn't it?