Only Fools and Horses the Musical 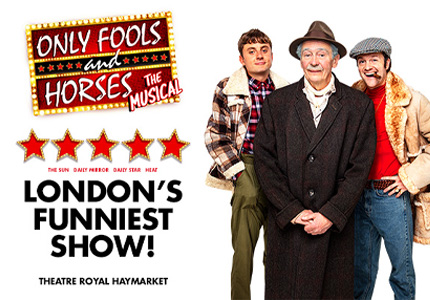 The best loved cockneys of the entertainment halls of fame, Del Boy and Rodney take to the stage for West End show Only Fools and Horses the Musical. Written by the series’ writer John Sullivan’s son, Jim Sullivan, alongside comedy icon Paul Whitehouse, the musical features music by Chas and Dave. Witness the dodgy deals, the markets and the hilarious japes in this heart-warming show at London's Theatre Royal Haymarket.
Read more
FIND TICKETS
Booking until 29 April 2023
Run time is 2 hours 30 minutes (including an interval)

Whilst the postal address is Suffolk Street, the Theatre Royal Haymarket box office is accessible from the Haymarket entrance and is open Monday – Saturday from 10am-8pm. Tickets arranged for collection can be picked up from the theatre’s box office within the hour before the performance is due to start. Collectors will need to bring their booking reference and the card on which the purchase was made. Theatre Royal Haymarket London

The current building opened in 1821 with a production of The Rivals, followed by Our American Cousin (1862) An English Gentleman (1871) and a number of burlesque performances.

Soon, productions began to run for an extended amount of time, with J. M. Barrie’s Mary Rose (1920) running for 399 performances and Yellow Sands (1926-1927), which ran for 610 shows. Notable productions after this included The First Mrs Fraser (1929), starring Marie Tempest, Noel Coward’s Design for Living (1939), The Importance of Being Earnest (1948) and a production of The Glass Menagerie, starring Helen Hayes.

By this point, the Theatre Royal Haymarket was known for a quick turnover of plays featuring star casts. Productions of note were Virginia (1981), with Maggie Smith, Hobson’s Choice (1982), starring Penelope Keith and Chekhov’s Uncle Vanya (1982) and The Cherry Orchard (1983). Throughout this time, the theatre produced many plays in repertory, including The Aspern Papers (1984), with Vanessa Redgrave, who also appeared in Antony and Cleopatra (1986).

2016’s shows included Mr Foote’s Other Leg, Bad Jews, How the Other Half Loves and Breakfast at Tiffany’s, directed by Nikolai Foster and starring Pixie Lott. Dominic Cooper then took to the stage in The Libertine, before the RSC’s Love’s Labour’s Lost and Much Ado About Nothing came to the theatre in 2017.

Damian Lewis and Sophie Okonedo starred in Edward Albee’s The Goat, or Who is Sylvia?, followed by Edward Fox in Sand in the Sandwiches and the RSC transfer of Queen Anne, starring Emma Cunniffe and Romola Garai. 2017 rounds off with dark comedy Venus in Fur, starring Natalie Dormer and David Oakes, followed by Christmas With The Rat Pack.

The world premiere of new musical Only Fools and Horses took place in early 2019 at the theatre, starring Paul Whitehouse. In April, family show Where is Peter Rabbit? hopped into the theatre to play morning and early afternoon performances. Children's classic The Tiger Who Came to Tea played a limited run over the 2019 festive period and will return for a summer season in 2021.

Like all other West End venues, the Theatre Royal Haymarket closed in March 2020 due to the COVID-19 pandemic. A production of the play Love Letters starring Martin Shaw and Jenny Seagrove was one of the first plays to open in the West End following the period of closure in December 2020.

Heathers the Musical returned to the theatre for a summer season in 2021, running alongside The Tiger Who Came to Tea. Only Fools and Horses returned to the venue in October 2021, continuing its open-ended run. Children’s show Peppa Pig’s Best Day Ever played over the Christmas period in 2021 and 2022.