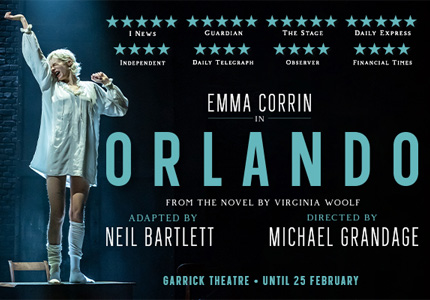 Golden Globe winner Emma Corrin (The Crown; My Policeman) stars in a new stage adaptation of Virginia Woolf’s novel in London. The story of a 16th century poet who transcends time, space and gender - made even more famous by the 1992 film starring Tilda Swinton -  is adapted for the stage by Neil Bartlett and directed by Michael Grandage (Red; Frozen the Musical). It celebrates its world premiere at the West End’s Garrick Theatre in 2022.
Read more
FIND TICKETS
Booking until 25 February 2023
Run time is 90 minutes (without an interval) 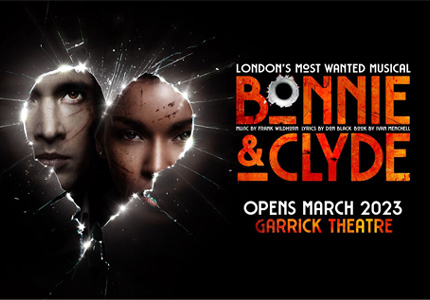 The true story of outlaws Bonnie Parker and Clyde Barrow is transformed into a passionate and electrifying show that has inspired a cult fanbase. Charting the duo’s journey from kids in a small town to criminals on the run during the Great Depression, Frank Wildhorn, Don Black and Ivan Menchell’s musical combines a shocking but alluring story with rockabilly and blues inspired music. Now returning to London after an acclaimed season at the Arts Theatre, Bonnie & Clyde plays at the Garrick Theatre for a three-month season in 2023.
Read more
FIND TICKETS
Booking from 4 March 2023 until 20 May 2023

The Garrick Theatre’s box office is located within the theatre building and is open Monday-Saturday from 10am-8pm Pre-booked tickets can be collected from the theatre's box office and can be picked up on the day of the performance in the hour before the show. You will need to take the credit or debt card you paid with and your booking reference number as proof of purchase. Visit the official website

London's Garrick Theatre was the first West End theatre to be named after an actor, opening in April 1889 with The Profligate. Named after acclaimed Shakespeare actor David Garrick, the theatre is built above the underground which means you can occasionally hear trains pass throughout performances. Whilst being built, an underground river was discovered, almost halting the completion of the building.

The Garrick Theatre is best-known for presenting a range of melodramas, comedies and straight plays, including A Pair of Spectacles (1890) which ran at the theatre for five years. The Notorious Mrs Ebbsmith (1895) followed and was considered to be rather controversial for its time, due to themes of social radicalism and free love.

In 2019 jukebox musical Rip It Up: The '60s, starring Harry Judd of McFly and Olympian Louis Smith played, alongside Adam Kay's award-winning stand-up show This is Going to Hurt - Secret Diaries of a Junior Doctor, which continues to play select performances through 2020. In June, new David Mamet play Bitter Wheat played at the theatre for a limited summer engagement, starring legendary actor John Malkovich. In the summer, science entertainment show Brainiac Live! delighted young and old in matinee shows.

In September 2019, classic British farce Noises Off, starring Meera Syal, Daniel Rigby, Lloyd Owen and Sarah Hadland, transferred to the Garrick after an acclaimed run at the Lyric Hammersmith. In January 2020, Adam Kay returned to the Garrick with for six performances of This is Going to Hurt. Following this, comedian Frank Skinner brought his hugely successful stand-up show, Showbiz to the venue for a strictly limited five-week run.

In March 2020 a revival of the musical City of Angels began performances but was forced to close early due to the COVID-19 pandemic. The Garrick Theatre reopened with a season of socially-distanced shows, including Death Drop, Potted Panto and dance extravaganza Here Come the Boys.

During the summer of 2021, a musical adaptation of David Walliams' Billionaire Boy opened at the theatre. Jason Robert Brown's acclaimed musical The Last Five Years transferred to the theatre in September.

The London premiere of the brand new musical The Drifters Girl, starring Beverley Knight, opened in November 2021 and closed in October 2022. The Horrible Histories gang brought their latest show to the West End, Terrible Tudors, for a run of performances during the 2022 summer holidays, followed by Rob Madge's acclaimed autobiographical show My Son's a Queer (But What Can You Do?) and drag murder mystery Death Drop: Back in the Habit. In December 2022 an exciting new version of Virginia Woolf's Orlando opens at the Garrick starring Emma Corrin. Cult hit musical Bonnie & Clyde follows in 2023.