If you sit in the Gillian Lynne Theatre and close your eyes for just a moment, you’d be forgiven for thinking it was the real Jack Black on the stage - you know, the one from the film.

It may not be Jack Black himself, but Craig Gallivan, who plays the character of Dewey Finn, is every inch as expressive and lovable as the Hollywood star himself.

For those who haven’t seen the film, the story follows a wannabe rock star whose mission is to win an upcoming ‘Battle of the Bands’ contest. But first he must qualify for the competition. He plans to do so by enlisting the help of a musically talented gaggle of kids he meets when he fraudulently takes a job as a supply teacher under his childhood friend’s name “Mr Shneebly”. The strait-laced headmistress on the other hand, isn’t convinced that the parents of the privileged children would approve of the idea. 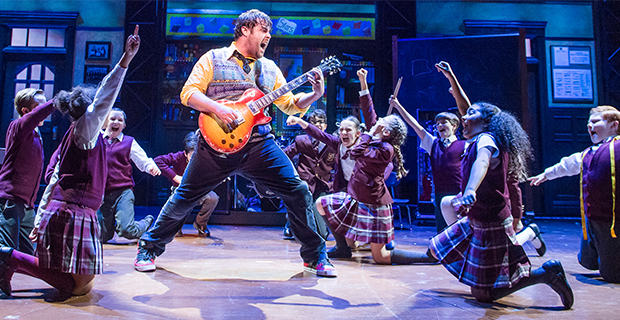 Giving every scene immeasurable levels of energy, Gallivan really is the star of the show. But then again, so is every single child on stage with him too. All the kids in the Horace Green classroom play instruments from the bass to the drums with nothing short of expert flair and a whole heap of sass. Oh, and they can really sing too. Arguably the best song in the whole show is "Stick it to the Man", during which you’d be hard-pressed to find anyone in the audience who isn’t cheerfully tapping a foot along to the infectious beat.

When it comes to the scripting, it’s witty and sharp, staying on a carefully balanced level that works for both the adults and the kids in the audience. That’s the beauty of this show - it’s perfect for all those whose main priority is simply to have an upbeat, uplifting and inspirational evening out.

Just try not to come away feeling too bad about yourself. The kids on stage are so musically talented that they might leave you wondering why on Earth you gave up playing the recorder when you were 12 years old, having reached the dizzying heights of what you thought was your peak - at a mere grade two.