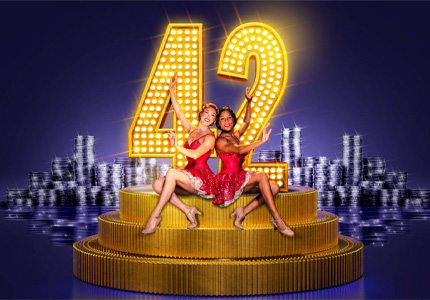 Iconic showbiz musical 42nd Street makes a spectacular return to the West End, in a brand new co-production between Sadler’s Wells and Leicester Curve.  The show-stopping musical about a chorus girl who gets a shot at the role of leading lady features toe-tapping songs “We’re In The Money” and “Lullaby of Broadway” and stunning tap-dance routines by a huge cast. It was last seen in London in 2019 at Theatre Royal Drury Lane. Directed by Jonathan Church (Singin’ In The Rain), 42nd Street is at Sadler’s Wells for a strictly limited season.
Read more
FIND TICKETS
Booking from 7 June 2023 until 2 July 2023

The Sadler’s Wells theatre Box Office is located within the main Sadler’s Wells Theatre building on Rosebery Avenue and is open from 10am to 8pm. Those collecting tickets from the Box Office may do so from an hour and a half before the performance is due to start. Collectors will need the card on which they made the payment and their booking reference number as proof of purchase. Visit the official website

“Sadler’s Wells” as we know it today is the sixth theatre on the site since 1683, with the final theatre re-built in 1998. The name Sadler’s Wells is derived from the original founder of the theatre, Richard Sadler and a well he found underneath the theatre that was thought to bring healing properties.

Back in the 17th century, the theatre was popular for its music concerts as well as it’s healing spring! Music continued to characterise the theatre, especially opera, up until the Sadler’s Wells Opera Company (now the English National Opera) moved out of the theatre in 1968.

The 18th Century saw veteran clown, Joseph Grimaldi, take to the stage throughout what was essentially a century of comedy and melodrama. Notable performances in the 19th centuries included early productions of A Christmas Carol (1841), a season of Shakespeare plays such as Macbeth (1844) and Anthony and Cleopatra (1849).

The Sadler’s Wells Ballet School was established in 1931 and began touring the UK throughout World War Two, thus really putting Sadler’s Wells as a dance house on the map.

Following the departure of the Opera Company in the late 60’s, Sadler’s Wells started to delve further into the world of dance, realising after the failure of their second Opera Company that dance was the venues niche.

Matthew Bourne’s Swan Lake first performed at Sadler’s Wells in 1995 before touring, which again drew attention to the theatre as a dance house.

The theatre was rebuilt in 1998 and opened with the Rambert Dance Company’s Lolanthe. Since the grand reopening the theatre has exclusively hosted movement and dance performances and regularly host performances from Rambert, Northern Ballet Theatre, Birmingham Royal Ballet and the Scottish Ballet.

In 2019, two Matthew Bourne productions played. A brand new production of Romeo + Juliet premiered in the summer, and The Red Shoes triumphantly returned for the Christmas season.

The acclaimed stage adaptation of Singin' in the Rain played at Sadler's Wells during summer 2021, starring Adam Cooper.