Come From Away: The Launch Party 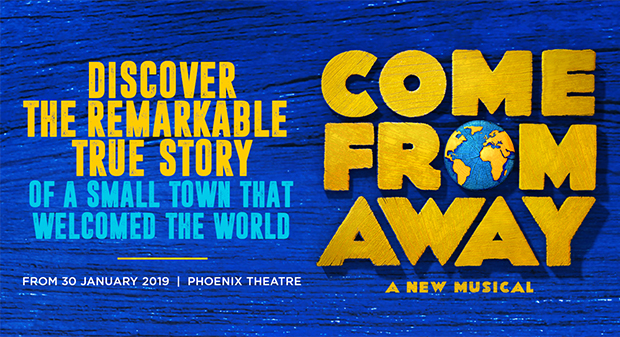 It was early 2017 when new musical Come From Away opened on Broadway, so it will have been an impatient two-year wait by the time we get to see it on this side of the pond. The West End launch party was a reminder of this sorry fact, whilst also serving to ramp up our excitement for the arrival of the multi-award winning show.

Directed by Christopher Ashley, Come From Away is set in the weeks that follow the 9/11 bombings, as plane passengers are emergency grounded on Canadian island Newfoundland. It is based on the true stories of the residents there, who opened their hearts and homes to the 7,000 misplaced travellers.

The launch party was held at the elegant Canada House, with Justin Trudeau’s framed likeness looking down from the foyer and the red and white flags undulating in the wind outside. Guests were treated to a bountiful buffet breakfast, including pancakes with pure Canadian maple syrup provided by St Lawrence Gold. To kick off the event, we watched a televised welcome message from co-authors David Hein and Irene Sankoff who were in Seattle and unable to attend in person.

Three live performances followed, marking the first time some of the show’s songs had been unveiled to the public. The songs were uplifting, melodic, full of exposition and made even more impressive by the fact that show rehearsals had not yet begun.

With this came an exciting piece of casting news. Musical theatre heavyweight Rachel Tucker is to star in Come From Away as real-life American pilot Beverley. She gave a recital of one of her numbers from the show, backed by an all-female ensemble.

Come From Away will see its cast swap and change between different roles. Alongside Rachel Tucker as both Beverley and Annette will be Jenna Boyd as Beulah, Nathan Campbell as Bob and Clive Carter as Claude, to name just a few.

Placed around the grand hall are placards giving fun facts about Newfoundland. Did you know they have their own dictionary, since they have so many of their own words and turns of phrase? One of our favourites was, “who knit ya?”, meaning “who are your parents?”.

The launch party made clear that Come From Away is a big-hearted and worthy venture that pays homage to a world-changing moment in our recent history. We can’t wait to see the whole thing when it opens at the Phoenix Theatre in January 2019.

Get your Come From Away tickets here.

The Come From Away launch party took place on Wednesday 10th October 2018.