Alan Bennett’s latest play throws open the doors of fictional ‘The Beth’, a hatch ‘em and dispatch ‘em local hospital in northern England that’s in danger of closure. It teems with Bennett’s signature wit, working class grit, eccentric characterisation and the humour born of everyday minutiae. With plenty to say about the state of the UK, it strikes the balance between comforting cosiness and sociopolitical foreboding.

Feeling the pressure of NHS cuts, the hospital trust chairman is turning up the smarm in an attempt to win over the public and the folk in Westminster. He’s selling a small-town, sentimental picture of life at ‘The Beth’, but doesn’t mention that there is rarely a spare bed going. A young Whitehall bureaucrat scoffs at his efforts, explaining to him that, “the state cannot be seen to be working”. Elsewhere, the geriatric ward has formed a choir, a documentary crew is searching for a story and a nurse is taking the matter of the bed shortage into her own hands. 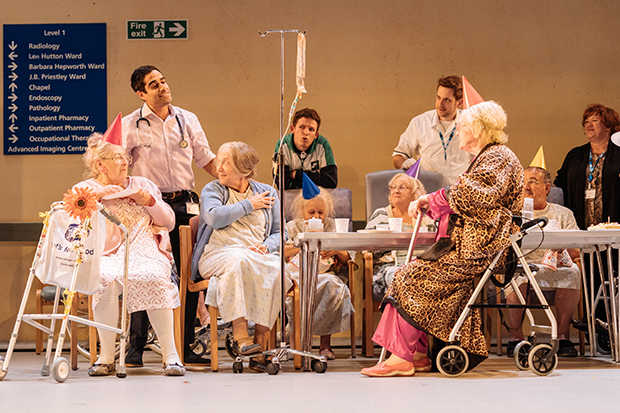 Sandwiched between the dialogue are heart-warming dance and song numbers performed by the elderly residents. During these nostalgic ditties, a patient tips a disposable bed pan to her head like a fedora, the patients’ infighting dissipates into smiles and the looming threat of mortality is vanquished.

Far from being just a wistful Last of the Summer Wine-esque comedy, Allelujah! confronts the tribulations of the NHS and its lack of backers in positions of power, our attitudes to the elderly and our contradictory immigration policies. Its intention is good, but it never quite packs the punch you’re waiting for.

The play goes into direct-address mode to wrap up, summing up its themes in what seems a little too much like a lecture. This spelling-out is an unnecessary decision; Bennett should have more faith in his own subtlety, and in his audience.

Bennett‘s long-time collaborator Nicholas Hytner directs, giving every dance step and pithy remark divided between the large ensemble its moment to shine. Bob Crowley‘s set consists of slick sliding partitions that take us from one room or corridor to another, at once sterile and pleasing. George Fenton‘s musical compositions and Arlene Phillips‘ choreography add light to counter the shade.

A strong cast maximises the warmth and humour of Allelujah!. Deborah Findlay is authoritative and divisive as Sister Gilchrist. Jeff Rawle is a riot as forthright patient Joe, who can dance but not walk. The sweet-voiced but sharp-edged Mrs. Maudsley aka ‘the Pudsey Nightingale’ is played with spot-on comic timing by Jacqueline Clarke.

Bennett‘s first play since 2012’s Cocktail Sticks is dark of humour and big of heart. It doesn’t reach the formidable heights of Talking Heads or The History Boys, but the great playwright is back, so we’ll take it.