“TRADITIONAL, YET MANAGES TO BRING A FRESH PERSPECTIVE ON ALL ITS TIME-HONOURED CHARACTERS”

In many prominent Othello productions, the titular moor is the only character played by a black actor. In these instances he seems more obviously vulnerable, more ‘other’. In truth, 17th century Venice would have been full of different races and creeds, much like 2018 London. The Globe’s latest take on Shakespeare‘s famous tragedy, in which many of the roles are played by black actors, presents its issues of racism as implicit rather than a matter of course, and draws a more relevant parallel with today’s London.

Director Claire van Kampen has her cast make use of every straight and corner of the main stage. She’s included a chorus, two of whom are dancers, to bring a high-tempo flurry to many of the group scenes. The production’s spare use of music is effective, most poignantly when Desdemona tearfully sings a childhood tune, harmonising with Emilia. Jonathan Fensom‘s elegant costumes root the entire operation in a very traditional Shakespearean space.

Mark Rylance‘s Iago is the most deceitful yet. His persona takes a while to adjust to, being neither shrewd nor sardonic as audiences might have come to expect from the role, but instead lovable and dithering. But as his chaos-spreading machinations take ever firmer hold, this façade proves itself a stroke of genius. How could the other Venetians ever doubt this humble, bumbling sweetheart? 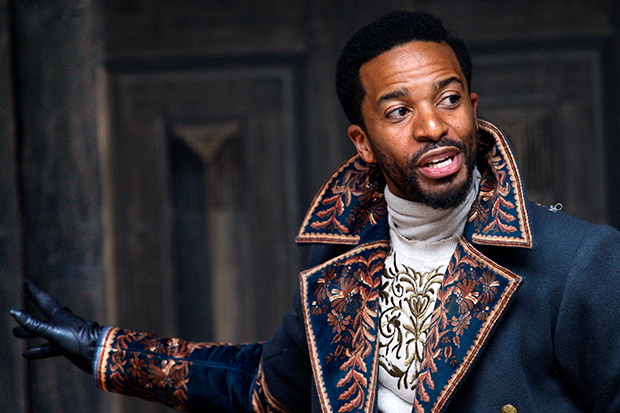 Sweet and warm, Jessica Warbeck evokes empathy as Desdemona. André Holland‘s Othello is as winsome in his strutting, beaming confidence as he is pitiful in his jealous wretchedness. During Othello’s loved-up early scenes, he smilingly acknowledges geese flying across the circle of sky above the open-air theatre.

It’s a strong cast all-round, and the production wisely grasps the chance to have Sheila Atim, who plays Emilia, showcase her stunning singing voice during a couple of songs.

When that fateful climax finally takes place, it’s a horror to behold. Warbeck does a heartrending job of depicting a girl who spends her last hours miserable before being brutally asphyxiated by the man she loves. The Globe’s generous stage becomes intimidatingly formidable around her as the audience steels itself for the horrible moment. We’re left with the aftermath of a great tidal crash of male toxicity caused by the men who premeditated her demise; men who were quick to praise her chasteness and honesty but credited her with no agency beyond that; men quick to reach for knife blades, seeking revenge where Desdemona would forgive.

A traditional offering which still manages to bring a fresh perspective on all its time-honoured characters, the Globe’s Othello is an epic triumph.