“ROMANCE IS ULTIMATELY DEADLY, BUT NOT ALWAYS DEADLY SERIOUS.”

When watching an updated version of Romeo and Juliet, one can’t help but be reminded of Baz Luhrmann‘s 1996 film. Although there are one or two similarities, such as the rager of a Capulet party where the young couple meet, RSC Deputy Artistic Director Erica Whyman‘s interpretation of Shakespeare‘s most popular play cuts its own, altogether more British path. It forms part of the contemporary Shakespeare season at the Barbican Theatre, and updates the centuries-old story to a landscape that resonates today.

Bally Gill and Karen Fishwick impress as the bard’s star-crossed lovers, and form part of a diverse cast including female actors in originally male parts (the peacekeeping Prince, and Romeo’s relative Mercutio, who meets her untimely death at the hands of the Capulets), as well as London teens forming part of the chorus.

Romance is ultimately deadly, but not always deadly serious. The youth and inconstancy in the story are acknowledged and played on as a source of humour, with Romeo’s overblown statements in favour of Juliet performed as comic sighing teenage heartache.

Humour too comes from Ishia Bennison as Juliet’s Nurse. I had never considered the Nurse to be such a key character, but the performance was compelling, and provided warmth and a real human touch that made the Nurse and Juliet herself instantly more real and frankly more likeable, particularly in contrast with her aloof mother. This time Juliet’s choices suddenly seem, if not reasonable, then at least understandable. 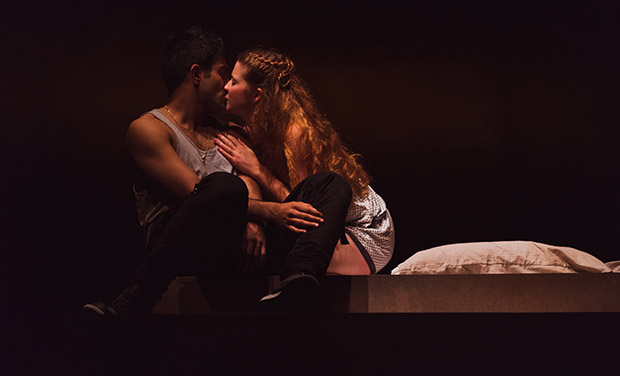 A special mention should be given to Ayse Tashkiran and Kate Waters, who are credited with Movement and Fights respectively. The dynamic physical performance lends meaning and ease of understanding to source work many deem to be dull and incomprehensible. However, at times it does verge on the excessive, running the risk of detracting from the spoken performance.

The youth of the cast, the fashionable costumes and the emphasis on physical over spoken performance, demonstrate the production’s effort to open up Shakespeare to a younger audience.
The sparse, industrial set is in harmony with the brutalist Barbican architecture. This gives a sense of desolation in the tragic scenes and in spite of any humour in parts of the performance, these scenes are uncompromisingly sharp and bleak. Rapiers are substituted for knives and this adds to the analogy drawn between the Montague-Capulet rivalry and contemporary British gang violence.

The pride and loyalty driven violence of the famous literary family feud is given a renewed sense of urgency in the context of London’s knife crime epidemic. Although the performance at times steps into the exaggerated and bombastic, it is nonetheless entertaining viewing and confirms Gill and Fishwick as ones to watch.