“AN URGENT RHYTHM SUSTAINS THE ENERGY IN TIGHT CONCENTRATION THROUGHOUT”

debbie tucker green has constructed the most eloquent of poems charting racism and the black experience in England and the U.S, which is left to resound on a pared back stage. Split into three parts, ear for eye is shot through with the power of the spoken word, managing to say volumes while never quite spelling anything out. Allusive, rhythmic, intricate yet soberingly substantial, it is a thing of beauty.

Part One comprises a collection of vignettes that explores police brutality, presumed guilt and protest. A mother and father try to ready their teenage son for the reality of the world outside. They warn him which gestures to avoid in order to stay out of trouble but the window of safety is desperately thin. Hands in pockets? Arrogant. Hands at sides? Suspicious. Hands clasped as if to beg? Sarcastic. Later on the scene is repeated with a new family unit and a son who is deaf (played with sweet affability by real-life deaf actor Jamal Ajala) which brings heightened jeopardy to the concept. 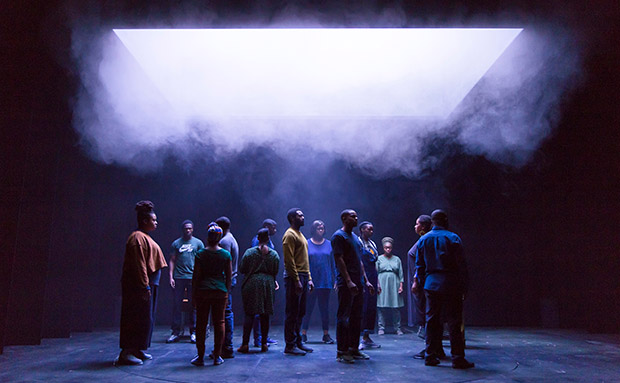 Later. “I’m juss lashin back the backlash lashin me”, explains an African American boy, pumping adrenaline from taking part in a protest. There’s an urgent rhythm to each short piece which ensures the energy is sustained in tight concentration throughout. Words overlap, staccato exclamations stab, frustration seethes.

But while each vignette is pacey and rhythmic, the overarching section loses its momentum a little each time a new vignette begins. tucker green has zoomed into these microcosms of fear and tension with stark clarity but the bigger picture lacks phrasing and lets those tightly wound units of energy dissipate.

Part Two is the play’s highlight; a white professor and a young black student fiercely debate the habitual terms used in the media following crimes involving race. How is it acceptable to explain away a rampaging gunman with terms like “lone wolf” and “the trauma of an absent father”? Where is the phrase ‘white supremacist’? Racially motivated murder? It’s a skilfully written argument that sends itchy frustration around the audience, who react in low exclamations and tuts at the smug arrogance of the professor. 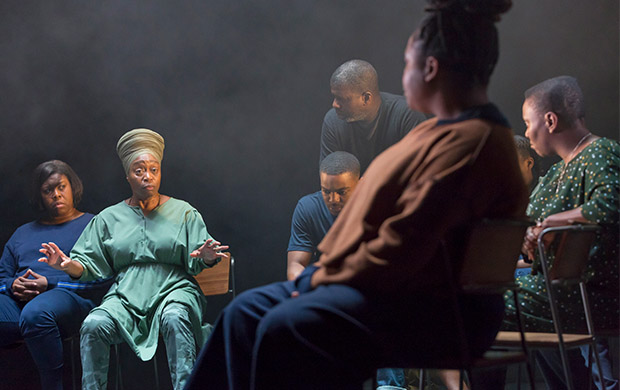 The final part sees a screen descend over the stage. Footage plays; white families read out Jim Crow laws (enforced until 1965!) of segregation. This presentation of history gives us a compare-and-contrast, a “but how far have we really come?” that’s bang on the money. Unfortunately, though, the extended screen time kills the momentum that’s been built up live on stage.

Lashana Lynch as the student is magnetic, grappling between her low self esteem versus her great belief in her cause. Angela Wynter proves, with an early monologue, that she has perfect control of the script’s poetry, and a captivating presence to boot.

The epic comprehensiveness that has gone into the script is in part evidenced by the thickness of the play text, the chunkiest the Royal Court has released in years. You could feel the play’s force just as well with your eyes closed. Merle Hensel’s design traps the cast inside a giant, smoke-filled tank before slowly raising it to herald the start. Aside from this and the video footage, the stage is inhabited only by bodies and by chairs. Nothing else is needed when tucker green’s words are both ornament and tool, at once weapon and gift.