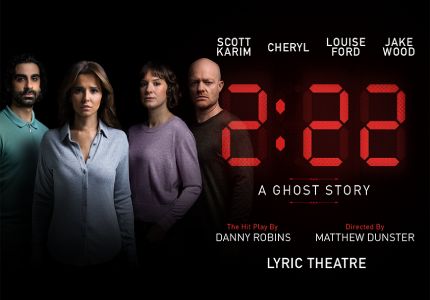 Singer Cheryl stars in the West End’s record-breaking thriller 2:22 A Ghost Story as sets its sights on the Lyric Theatre for another season of shocks and spooks. Danny Robins’ edge-of-your-seat play about a dinner party interrupted by supernatural bumps in the night has been a hit in the West End since premiering in 2021. Are you ready to stay up until 2:22 and discover the truth?
Read more
FIND TICKETS
Booking until 23 April 2023
Run time is 2 hours (including an interval) 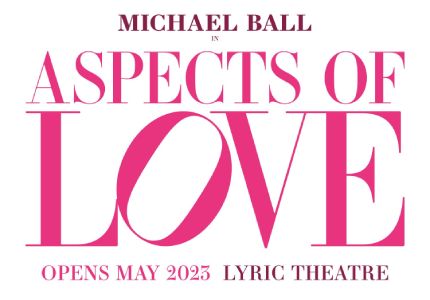 Michael Ball stars in an exciting revival of Andrew Lloyd Webber’s sweeping musical Aspects of Love, which is reimagined for the 21st century at the Lyric Theatre. The story of six people whose lives are entangled in love, lust and longing has a wonderful centrepiece in the iconic song “Love Changes Everything”, made famous by Ball’s original performance over 30 years ago. This rich drama about the transformative nature of our emotions is back in the West End for a strictly limited season in 2023.
Read more
FIND TICKETS
Booking from 12 May 2023 until 11 November 2023

The Lyric Theatre box office is located within the theatre building on Shaftesbury Avenue and is open Monday- Saturday 10am-8pm. Tickets can be arranged for collection at the box office and may be picked up on the day from an hour before the performance starts. You will need to take the credit or debt card you paid with and your booking reference number as proof of purchase. Visit the official website

London's Lyric Theatre is Shaftesbury Avenue's oldest surviving theatre, first opening in 1888 with a transfer production of Dorothy. Originally, the venue was intended as a house for operettas, featuring productions such as The Mountebanks (1892) and His Excellency (1894).

In the 1930's the venue saw Strange Interlude (1931) and The Royal Family (1934), which starred Laurence Oliver. During the Second World War, the Lyric Theatre went dark, reopening with Terence Rattigan’s The Winslow Boy (1946).

Over the next few years, a range of productions played at the theatre, with notable shows including The Little Hut (1950), which ran for 1,261 performances, South Sea Bubble (1955), Robert and Elizabeth (1964), Alan Ayckbourn's How the Other Half Loves (1972), which ran for 869 performances and hit musical Blood Brothers (1983), which was later revived at the Phoenix Theatre for a long run.

In 2009, Michael Jackson musical Thriller Live opened. Days later, Jackson surprisingly passed away, causing the musical to rocket through the roof, becoming a tribute production to one of pop's greatest performers. Thriller Live continues to run to this day, entertaining audiences from around the world.

2017 sees Thriller Live enter a record-breaking year, with Showstopper! The Improvised Musical continuing limited performances. Shows throughout 2017 included What the Ladybird Heard, The Simon & Garfunkel Story and The Gruffalo's Child (2018).

The Lyric Theatre's 2018 season sees Thriller Live return, alongside further performances of Showstopper! and The Simon & Garfunkel Story. Summer saw We're Going on a Bear Hunt return to the theatre, whilst the winter production for children sees Tall Stories' Room on the Broom Live return.

Thriller Live closed in 2020 following an 11-year run at the venue. The theatre closed in March 2020 due to COVID-19 restrictions. The venue reopened in December with a socially-distanced production of the hit musical SIX. The theatre was forced to close again later that month and reopened in May 2021, continuing with performances of SIX. The hit musical played a 3-month run at the Lyric Theatre before transferring to its forever home at the nearby Vaudeville Theatre.

BAFTA-winning children's show Operation Ouch! returned to the West End with a brand new show at the theatre in December 2021 for a festive run.

Brand new musical biopic Get Up, Stand Up! The Bob Marley Musical opened at the Lyric Theatre in October 2021, starring Arinzé Kene. It closed in January 2023, and shared the Lyric stage with hit YouTube-inspired Blippi the Musical over Christmas 2022.

In 2023, singer Cheryl makes her West End acting debut in 2:22 A Ghost Story. Later in the year, Michael Ball stars in a revival of Andrew Lloyd Webber's celebrated musical Aspects of Love, directed by Jonathan Kent.