The stark division – but mainly repulsion – that Martin McDonagh’s latest play is causing among critics has become almost as big a draw as the playwright’s credentials. This is the man who, just this year, won three BAFTAs and two Golden Globes for his film Three Billboards Outside Ebbing, Missouri. His most recent plays – Hangmen and the latest revival of The Lieutenant of Inishmore – racked up stacks of five-star ratings. So how has the king of black comedy managed to disappoint so spectacularly?

At face value, A Very Very Very Dark Matter is a damning of colonialism which explores stolen voices and the appropriating of stories, then scales out to slavery and genocide. All this is hung on the framework of a grisly fairy tale involving Hans Christian Anderson and the ‘black pygmy’ named Marjory whom he keeps locked in his attic and who is responsible for ghost writing his stories. Then there’s a time-travelling aspect, in which two bloodied Belgians come from the future to kill Marjory before she can derail the genocidal colonisation of the Congo, and there’s the based-on-real-life visit which Anderson made to his contemporary, Charles Dickens. But amid all these sprawling ribbons of story and concept, where is the point? What’s the correct lens through which to view this mash-up of horrors and perceive something enlightening? 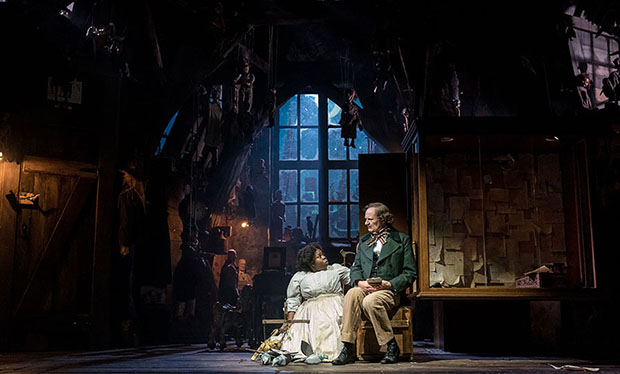 Blatant power imbalances abound, with the white European man exploiting those around him. The atrocities in the Congo fronted by King Leopold II that left ten million dead (and which were largely ignored by the Western world) loom beyond. Does the time travelling highlight that there’ll never be an end to the imbalance? Perhaps it’s a look at what the underdog could achieve if they weren’t oppressed, held back or undermined. But none of these seem a satisfying answer to the riddle of this play, because McDonagh isn’t a preacher of morals; his films and plays don’t have an underlying message of right and wrong, unless it’s that people are flawed and nobody has the answer. Apparently Dickens supported the Christian indoctrination of ‘the savages’ which you’d perhaps not expect from a man who spoke out so eloquently against social injustice. This dichotomy makes Dickens exactly the kind of character McDonagh should excel in exploring, but instead he’s portrayed as a panto villain.

There’s good stuff though. The story is fantastical and gothic in a way that befits the wretched fairy tales of its co-protagonist. Anna Fleischle‘s nightmarish, marionette-inhabited set is a triumph.

Then there’s Jim Broadbent as Hans Christian Anderson: bumbling and clueless and casually, intrinsically racist. He’s an ugly reminder that the would-be harmless comedy characters from traditional stories (and – hello – in parliament and on TV) can be stand-ins for the most heinously bigoted views.

Johnetta Eula’Mae Ackles as Marjory is magnetic, a study of indignance and hurt sporting brittle armour. A moment which sees her lip syncing to the gravelly tones of narrator Tom Waits is deliciously unsettling. She alone bumps the production up by a star.

The irony that McDonagh is a successful European white man himself, borrowing stories to put on stage before a room of mostly white Europeans, must surely be intentional meta-theatricality. This paradox in itself isn’t necessarily a problem; we want society’s dominant, privileged voices to admit this blaring truth as much as we want the underrepresented voices to address it. The Bridge Theatre, on the other hand, has so far given over its stage to British men almost exclusively. Dark Matter’s theme of skewed platforming should give Nick Hytner cause for reflection. His insistence that the Bridge won’t use specific diversity quotas necessitates a heavier burden of evidence of automatic inclusivity and discernment.

It’s hard to nail down a response to Dark Matter, perhaps because of the lingering desire to believe that the Pollock-esque spatter of ideas conceals something of substance. With so many strange little details thrown into the script, one wonders if there is a hidden connection that will set the whole thing alight, elevate it above the sum of its components. Or is that being too generous? Am I just too unwilling to admit that this play has little going on beyond the façade?