CHILING AND KUBRICKIAN BUT LACKS A COHERENT THEME

Taking it from the foggy Scottish moors and transplanting it into a modern setting, we see the castles of Glamis and Fife shown as shabby hotel lobbies. Reminiscent of the Overlook Hotel in Stanley Kubrick’s The Shining, this is one of many horror tropes on display. In a similar ‘Kubrickism’, the weird sisters are now a trio of schoolgirls, with haunting nursery rhymes a la “Ring-around-the-Rosie”, filled with skipping glee and playful delight. The effect is chilling and highly effective, and the excellent child actors deal superbly with a heavy load of narrative. The dark, vaulted stage is lit with shafts of dim light, with creeping, drifting columns of dust as deed is done.

The titular Macbeth (Christopher Eccleston), in dark military fatigues instead of armour, is a powerful figure, both playful and demonic at times. The former Time Lord, making his RSC debut, is on fine form with gruff and swagger. He depicts the tale of a righteous man on his path of bloody ascension, then falling into the fury of a despot trying to deny his fate. 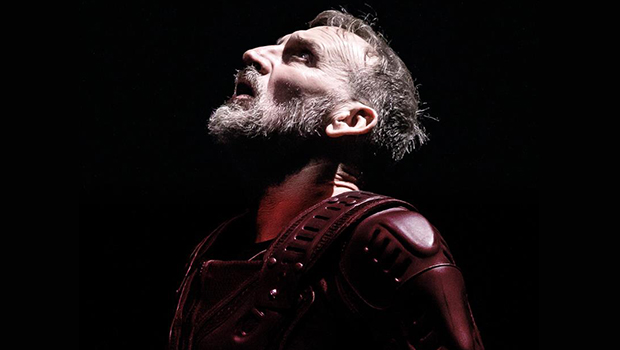 High praise too to the highly diverse support casting, with notable mentions for Banquo (Raphael Sowole), Duncan (David Acton), Macduff (Dward Bennett) and particularly to The Porter (Michael Hodgson), who omnisciently watches all with a twisted glee and mirth.

As crucial as Macbeth himself is his foil, the calculating and scheming Lady Macbeth (Niamh Cusack) does a fine job as a desperate housewife, eager to bully and drain her husband of the ‘milk of human kindness’.

However, these strong performances are marred by an odd choice of theming, with multiple tactics used to create atmosphere and tension, but with no clear underlying intent. A key example is the clock, which starts its countdown at the knife blow of Macbeth’s murder of King Duncan, running down until his inevitable downfall. However unfortunately it hampers the play, forcing the timing. In addition, there is occasionally some loss of clarity in dialogue, which can cause lapses in narrative, unless you are familiar with the Scottish Play.

Overall there is much to enjoy, with excellent lighting and sound devices at play. However, a lack of coherent theme means these tactics ultimately detract from the fine performances. If you are familiar with the text and a fan of Eccleston’s work, you will enjoy this tale of murder most foul.