“INFECTIOUS; THEY EXECUTE THEIR MOVES WITH FLAWLESS HARMONISATION”

When I think of tap dancing, an image of graceful dancers gliding and toe-tapping lightly around in elegant costumes springs to mind. The dance phenomenon Tag Dogs, however, is anything but graceful and light, as six men, sometimes shirtless but always scruffy, clump about in heavy boots across a stage resembling a steelwork construction site.

Created over twenty years ago by choreographer Dein Perry, performing to billions at the 2000 Opening Ceremony of the Sydney Olympics and winning a host of theatre awards around the world along the way, Tap Dogs is a boisterous, macho play-off between the male dancers as they make a lot of noise with their footwork skills.

The message is clear: these are no ordinary tap dancers. These are workmen and regular lads who show the audience just what can be done with a couple of metal plates screwed to the bottom of a shoe, as they create a spectacle involving basketball dribbling, water splashing and upside-down tapping. 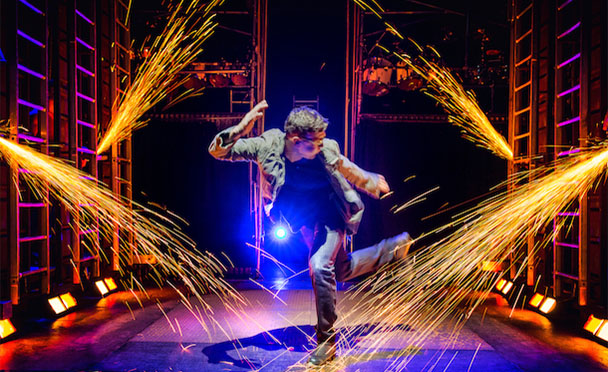 With distinct characters of the dancers – from the foreman to the young kid learning the ropes – Tap Dogs has personality but no plot, but the lack of dialogue only turns the attention even more to the infectious dancing as they execute their moves with flawless harmonisation. The men are also joined on stage by two female drummers and percussionists, the only musicians in the show, who turn the industrial site into more of a rock concert feel at times.

The highlight comes about halfway through as a drum kit is created from panels on the floor, with each panel masquerading as a different percussion instrument. As the men jump and tap at lightning speed across them, a touch of humour is welded in due to the high-pitched squeaking sound of one of the panels, much to the audience’s delight.

Some parts are more electrifying and engaging than others, meaning that certain sequences felt less interesting than they should have been, and with the drums added to the metal of the tapping, it is all quite stompy and brash. Overall however, Tap Dogs is an exciting and impressive display of just what can be done with tap dancing.