The Woods at Royal Court

In the deepest, darkest part of the woods, a woman has found a strange lump in the snow and now the lump is here in her hideaway. He needs her. But there’s someone else who needs her desperately and jealously, a figure who appears in different guises but whom she always knows by his smile.

Robert Alan Evans‘ dark and surreal new play is a poem to suffering. Its sweeping themes of grief and mental health go mostly unarticulated, hanging like a pregnant storm cloud that refuses to burst, and instead small moments give us permission to sympathise: the longing for the feeling of carpet between bare toes, the trivial fuss of imagined family conversation. The play’s intrigue comes from picking through what is true and what is imagined, what is past and what is present. It’s a glimpse into a troubled mind in which the subconscious is given flesh and free reign of the stage. 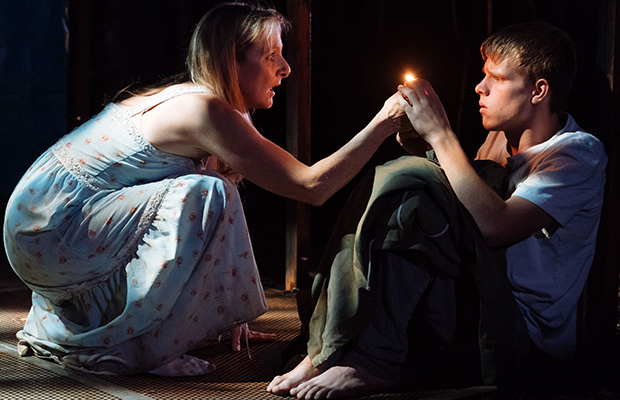 Lesley Sharp as ‘Woman’ is a study of complexity and damage with a thousand different facets to unpack; she demonstrates vulnerability and strength; embodies vulgarity and sweetness; is at once sympathetic and alienating. She slips between accents with classical skill.

Tom Mothersdale as ‘Wolf’ is both menacing and whimsical. His southern American drawl is a delight and he hovers in dark corners of the space like a bad dream. A clever bit of timing sees the ash of his cigarette falling off exactly on cue. Finn Bennett and Charles Furness complete a very capable cast of four as ‘Boy’ and ‘Kid’ respectively.

Lucy Morrison’s direction maximises the unsettling script while Naomi Dawson‘s set transforms the small upstairs space and makes its audience feel like lost children in the forest at night, wood chip beneath their feet and wintry bare trees all around them. A flashback is beautifully staged in searing light beyond the trees. Fire plays a part. So does pitch darkness.

Leaving The Woods feels like waking from one of those harrowing nightmares and being unable to shake its weight. And that is meant as the sincerest of compliments.